Hiking, Kilimanjaro National Park, Mount Meru, What A Safari Day Is Like 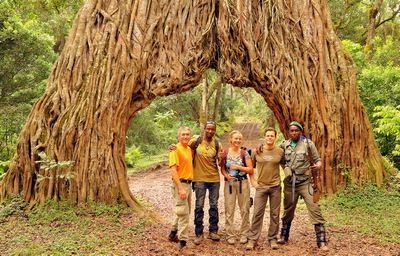 Mount Meru is the third highest mountain in Africa and one of the continent’s most rewarding climbs not only for the achievementsbut mostly  for the beautiful plants and animals found on its forested slopes.

The Meru Ash Cone once matched the summit of Kilimanjaro, Kibo Peak, in height but the volcano suffered a massive explosion perhaps a quarter of a million years ago that blew out the whole eastern side of the caldera leaving it with a distinctive tooth profile that is has today. The Ash Crater is  made up of red and grey gravels as well as dust built up gradually after the main explosion. In itself the cone is worth a climb to the summit

In contrast to Kilimanjaro, where tented camping options are available on all routes but Marangu, on Meru climb the one should be ready to stay in huts only.

In order to make your stay in wild safe and protect the animals from poachers, an armed ranger will be hiking with you up to Saddle Hut Camp There is only one route leading to the Peak – “Momella”. Three and four day hiking are available

The Momella route approaches Mount Meru from the eastern face, moving up through the northern ridge to the peak. The total trek distance is 45 km/27 miles.

From Momella gate where u sign in and meet with your guides, the road leads west fording a key river and crossing some open bushy grasslands, where a herd of buffalo graze around the base of Tulusia hill.

The track skirts the domed hill to the south an begins to climb through the densely forested foothills you here you may encounter bushbuck and the fleeting glimpse of a turaco flashing across the glade.

The road continues to wind its way up between the buttress trunks of the lower montane forest at about 2000 meters. Many of the trees are fig and Nuxia congesa and the much taller African olive with its curved tall and slender limb which is a far cry from the short, stubbly, wild European olive. Around the base of the tree grows black-eyed Susan in abundance.

igher into the upper zone of the forest the trees are predominately Juniper or African Pencil Cedar -the world’s largest species -and the equally tall Podo or east African yellow wood both of which are valuable as timber species. Podo provides food for the flocks of raucous red fronted parrots.

Glades formed by fallen trees and elephants are kept open by buffalo which graze the areas where lady’s mantle and a blue vetch species thrive in this area.

By the time Kitolo Hill is reach the vegetation has become open heath-land characterized by the bushy green Erika Arabia and the grey Stoebe Kilimanscharo.

You now reads Miriakamba Hut which is where you overnight and is the base to explore the crater floor. You enter the crater and see the old ash flows growing up the side of the escarpment like talons to the crater ridge 1500 meters up.

Hiding in the old ash you may see Klipspringer and the type of St John’s Wort who’s yellow color is a great contrast to the burnt grey lava.

After spending the night at Miriakamba there is a steep but relatively relaxed walk up to the Saddle hut through the open northeastern flanks of the mountain where the red flower hargenia trees grow profusely. The trees are covered in ferns and mosses and some have orchids growing.

Chewing on the woodland leaves are troops of colobus monkeys. Unique among primates they have given up the on the omnivorous diet of primates and live entirely as vegetarians evolving complex digestive systems along the way to deal with their high fiber diets of leaves.

Their croaking call of “hoa hoa hoa” can be heard through the forest before a black and white silhouette advertises their presents completely.

Less obvious but also sharing the montane forest are bushbuck, mountain reedbuck and duiker who forage among the undergrowth and do not venture out into the exposed upper slopes where giant heather has come to dominate.

Little Meru is only 215 meters higher than than the saddle from here there are superb views of Kilimanjaro, the momella lakes and to the west and north the wilderness which harbours Ol Doinyo Lengai and Lake Natron.

Day 3 to Socialist Peak and to Momella Gate

Day three will be accompanied by an early night to rest and relax before the final push to the summit from midnight. From today some will start experience few signs of fatigue and maybe preliminary stages of Mountain sickness. Don’t worry the best thing to do is to drink plenty of water and other fluids and make sure you stay hydrated. Summit day has an early start at around 12:00am. There is 1 hour steep climb to Rhino Point (3800m / 12,467ft), and then the path continues along a ridge of ash and rock to reach Cobra Point (4350m / 14,272ft). The summit of Socialist Peak (4566 m) is an hour more on a steep path with magnificent views of Kilimanjaro. Depending your speed, you can enjoy sunrise at Cobra Point or the summit. The views are stunning: the cliffs of the Crater rim, the Ash Cone rising from the crater floor, Kilimanjaro floating on the morning clouds, and the Rift Valley. The route back to Rhino Point in the early morning light along a narrow ridge between the sloping outer wall of the crater and the sheer cliffs of the inner wall is one of the most dramatic and exhilarating walks in Africa. Brunch and a brief rest is taken at Saddle Hut before continuing the descent to Miriakamba Hut and on to Momella Gate