Tanga, Tanzania’s third largest city and second largest port,  is the principal town on the northern coast of Tanzania, a time-warped port which briefly served as the capital of German East Africa before Dar es Salaam usurped the role.  Relaxed, friendly and atmospheric, it is a lovely character-filled town full of old German and Asian buildings.

Now one of the more modern ports along Tanzania’s coast, the city rose to prominence when settled by the Germans after the harbour at Bagamoyo proved to be too shallow for trade on any large scale.  Tanga boasts the first school in German East Africa, built in 1893, and a railway to Moshi was started in the same year and completed in 1911.  The rail link inland and the excellent natural harbour guaranteed Tanga’s survival  to this day, when most business conducted is export of sisal.

8 kilometres north of Tanga lies the entrance to Amboni Caves, the most extensive limestone cave network in East Africa and thought to extend hundreds of kilometres up the coast.  The caves have been part of local legend and folklore for thousands of years, long before their discovery by Europeans in 1940.  Local belief still holds that the main cave is inhabited by a god of fertility, and offerings are still regularly made here.  The forest around the cave entrance is excellent for bird-watching, and is also home to a troop of endemic black-and-white colobus monkeys.

Tongoni, about 20 kilometres south of Tanga itself,  was never a large town but was always well-off, and the ruins visible today stand testament to the wealth in the town.  The town, of the Shirazi people, peaked during the 14th and 1th centuries, and now boasts the largest concentration of historical tombs on the East African coast.  There is also a ruined mosque at the site.  The caretaker will charge a small fee to show you around the ruins.

Directly offshore from Tanga lies Toten Island, which can be reached by boat from the harbour.  On the island are ruins of two mosques and a number of tombs and graves – some locals refer to Toten as the Island of the Dead.

Pangani Town lies about 50 kilometres south of Tanga and is a traditionally Swahili town lying at the mouth of the Pangani River.  The town has a relaxed ambience, surrounded by virtually unspoilt beaches to both the north and south.   Historically the town has played a notable role, owing to its position at the mouth of the river, which assumed a vital role as a transport route to the interior of the country.   The town was a major export point for the notorious slave and ivory trades, and was one of the largest ports between Bagamoyo and Mombasa.  Within the town itself, remnants of the German and Arabic influences can be seen in the architecture and carved doorways.

The beaches to the north and south of the town have only recently been opened up to visitors with the advent of a new road.  This coastline is beautiful, consisting of long unbroken stretches of white sandy beaches backed by palm trees and light forest, in which the bird and wild life is well worth a look.

The river provides some of the best birdwatching in the area, as well as resident populations of crocodiles and other animals.  Boat and canoe safaris on the river offer the opportunity to observe nature form an unusual perspective!

Maziwe Island is approximately ten kilometres offshore and is a small sand island and nature reserve.  Snorkelling here is fantastic, and trips here can be arranged through the Cultural Tourism Office.  Maziwe can only be visited at low tide, however, as it disappears at high tide, and obviously there are no refreshments or other facilities available on the island!

Dar es Salaam is the biggest city in Tanzania and an important economic centre, making this place the richest one in the region. Its name literally means “the residence of peace” in Arabic, and its former name was Mzizima, which in Kiswahili means “healthy town”. Its population was estimated to be more than 5 million people – with growing tendency -, and until the year 1974 Dar es Salaam was the capital of Tanzania.


Full of useful information about planning your Tanzania Safari

Find Out More About Swahili Coast

This is usually in a large vehicle with space for up to 8 guests.

This is a private vehicle allowing you complete freedom. 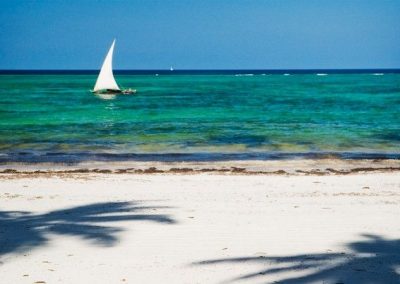 Click On The Articles Below To Find Out More Details

Kilwa Ruins - an archaeological treat- find out how to combine with your Tanzanian holiday.
Read More

Find out more about Family holidays in Tanzania
Read More

Tanzanian Holiday in Kilwa- find out how to combine with your Tanzanian holiday.
Read More

Lodge of The month Jan 2019 - Kilwa Beach Lodge .. read more about this lodge which is the gateway to the ruins of Kilwa Kisiwani.
Read More

Fishing trips to Kilwa and Mafia Island - find out how to combine with your Tanzanian holiday.
Read More

Read more on kayaking, kitesurfing and more watersports and how to combine with your Tanzania holiday
Read More

Tanzanian Holiday in Kilwa- find out how to combine with your Tanzanian holiday.
Read More